Your Optimal Body Comp for Triathlon

In my last post, I talked about the reasoning behind our 'big steel challenge' - an early season block of training that we insert for athletes to build (or correct for an in-season loss of) muscle mass over time

If the article content in the various triathlon magazines is anything to go by, another objective for a lot of endurance athletes at this point in the year is to decrease body fat, which energetically requires a different (competing) approach to the goal of adding muscle

This leads us to a proverbial fork in the road when it comes to body comp goals for the early season. Do we want to add or subtract? i.e. is it more important to our triathlon goals to become more muscular or less fat?

Make no mistake about it, these are competing goals. Even for the proverbially 'massively ripped' bodybuilder, it is a 2 phase approach of 'getting massive' then 'getting ripped' - build the raw meat then decrease the fat on top of said meat to look 'shredded'. While our end goal (& vernacular :-) may be considerably different, the 2 core objectives of building enough muscle to get the job done along with not carrying around any 'excess baggage' in the form of fat, is very similar and thus, the 2 phase approach of 'build it up just to tear it down' is also similar. The big question is... how much of each? That is, what is the perfect combo for us?

In this post, I offer a quantitative answer to that question with the use of somatotyping. Somatotyping allows us to transcend that linear framework that many athletes have of skinnier=better by assessing body composition (i.e. how the various components of the body - muscle, bone and fat, fit together) across 3 different scales... - endomorphy ('fatness'), mesomorphy (muscularity) and ectomorphy ('bony-ness'). Each scale has 7 'points', so a 1-7-1 individual would be the extreme of muscularity (think Incredible Hulk), 7-1-1 would be extremely fat (think Homer :-) and 1-1-7 would be your prototypical waif model

A visual representation of individuals with dominance in each type is shown below... 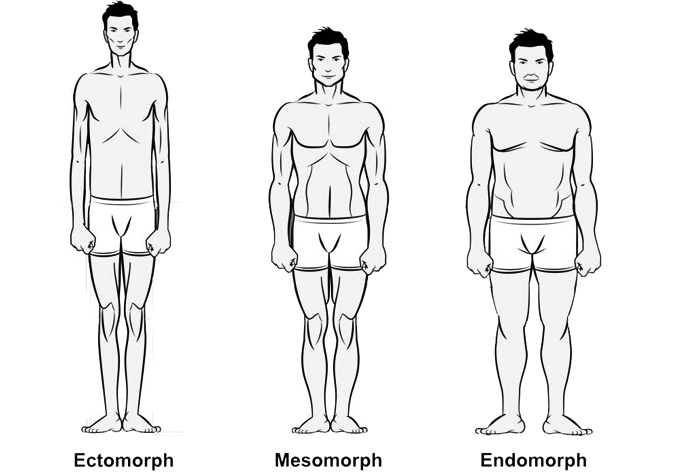 By using 3 scales we are able to bring in the important context of the size of the athletes 'chassis' It's common sense that a Ford F250 requires a lot more engine (muscle) power to propel it at a given speed than a Ford Focus. Context of the athlete's frame is important when deciding how much muscle is enough. Enter somatotyping..

Somatotyping actually began as a branch of psychology - a look at how an athlete's body type affects their neurochemistry and behaviour, a fascinating application introduced by William Sheldon (&, as an ectomorphic introvert, something that I'm, honestly, a little bit obsessed with) touched on here. While the initial use of somatotyping that I mentioned in the article has since lost favor, the process of somatotyping is still widely used in the field of sports anthropometry to identify the relationship between an athlete's body type and their potential for success in a given sport.

A good amount of research on this relationship has been performed across the entire sporting spectrum, from weightlifting to distance running & we now have a pretty good blueprint of the ideal athlete body type for a variety of different sports. Unsurprisingly, a high level of homogeneity is found in body type for the most successful athletes in a given sport. While all athletes tend to exhibit a relatively high level of mesomorphy - i.e. they all tend to be towards the top of the triangle, the other 2 scales swing a lot depending on the specifics of the given sport.

Even with the multisport nature of triathlon, successful triathletes, at the highest level, tend to be clustered in a fairly narrow range. Specifically, the 'sweetspot' for elite triathletes is a somatotype of ~1.5/4.0/3.0 for males (Anjos et al.,2003, Ackland et al.,1997) and ~3.5/4.5/3.0 for females (Leake and Carter, 1989, Ackland et al.,1997), i.e. a mesomorphic or ecto-mesomorphic type, with low-very low levels of body fat (especially for the men), a lighter than average frame, coupled with a higher than average level of muscularity (especially for the women). Incidentally, these research numbers gel with my own data from some of the top triathletes - long and short course in Boulder.

To see how your own numbers fit in to the mix, I've provided a calculator based on the Heath-Carter method of Somatotyping below. To use, simply enter your anthropometric data and hit calculate and it will give you a visual picture of where you lie on the somatotype 'triangle'. To get this data, you'll need a tape measure, skinfold calipers (you can get a cheap set here) and something to measure bone widths (a good size school compass measured against your tape measure works well). For some good tips/photos on taking these measurements see the 'skinfold' and 'girth' links here

You'll see that some of the input variables are quite fixed and related to structure, while others - fat and muscle inputs are somewhat malleable. This speaks to the relative 'change-ability' of your somatotype. While it certainly helps to pick a sport in line with your structure, changes in body composition can make a significant difference.

While I'm a big fan of DEXA testing for athletes, at $150-200 per test, it can be a bit pricey to do it frequently. In the absence of DEXA testing, regular 'check-ins' on your somatotype provides a great 'big picture' perspective of your body composition trends as they relate to success in your sport & can help to guide the coach and athlete as to what direction to head. You can literally see whether more muscle or less fat moves you closer to or further from that 'X marks the spot' point of optimal body comp for your sport.

In certain sports, it is very easy for the Type-A athlete to become too focused on weight and body fat without taking into account the required muscle mass (for their sport or for the inherent structure of their frame). Somatotyping is a much 'healthier' way of viewing the athlete as a whole.

Plug in your own numbers below to get your current % bodyfat, your endo-meso-ecto number and a visual plot of how close you are to the typical elite triathlete somatotype on the triangle